Man, oh, man! What a wild time at Seattle's ZomBcon this past weekend! The Dickheads made their big debut, and people really embraced them as their own.

Things are in a bit of a scramble here at the Safe House, as we get ready to head up to Seattle for ZomBcon, the West Coast's biggest zombie convention. We're all very excited to bring the Dickheads out to the undead masses. In addition to copies of the one-shot, we're going to have at the table an exclusive, limited-edition print of the Dickheads trying to blend in with the Seattle zombie crowd. It's a small run of 50 prints, which'll be signed and numbered, so act fast while supplies last.  Check it out here: See you all in Seattle!

Also, just wanted to thank everyone that's ordered books so far. Orders are shipping with new ones on the way. There have been people asking about spreading the word to their local retailers, and I'm going to start putting together flyers and retailer packs that I'll have here on the site that can be printed out and distributed if you'd like. In the meantime, just direct them to this site. And if you're a retailer that would like to order copies of the book, drop me a line directly at zombiedickheads@gmail.com. I'm a one-man shop at the moment, so the fact that many of you want to help out means the world to me.

Ok, folks -- printer troubles are behind us, the books are here, and if I may say so, they look SWEEEET!

To get your hands on a copy, click the Paypal button below or along the left side of the page! And if you're a retailer who'd like to order some for your store, drop me a line at zombiedickheads@gmail.com to place an order.

I'm also going to be doing signings all over the LA area, so stay tuned to this site for dates and times.

Posted by Chris Moreno at 4:39 AM No comments: 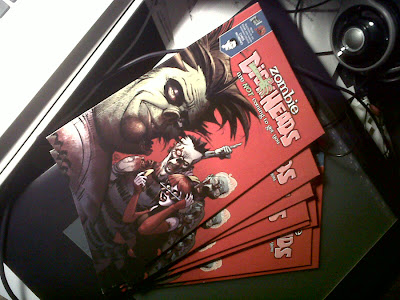 Posted by Chris Moreno at 9:01 PM No comments:

A very fine review by AICN's Mr. Pasty!
Posted by Chris Moreno at 12:41 PM No comments: