Ok, Dickheads, there's good news and bad news. First, the bad news: Due to a binding error, all of the Zombie Dickheads one-shots have been bound backwards. The good news? The backwards books look fantastic.

Unfortunately, this means that I'm not going to have books for the Nashville Comics and Horror Fest this weekend. But I will have a mailing list ready, so everyone that was planning on buying a book this weekend, come by and drop me your info, and I can make sure you get one when they go on sale on the website.

Sorry, folks. But rest easy, knowing that those responsible have been brought to justice.


Posted by Chris Moreno at 9:57 PM No comments:

Dickheads in the news!

The word is out on the street, the internet, uh, street, about Zombie Dickheads! Check out the Press page for archived news and mentions. Since some of these have the same info, and you're all such busy people, here's a brief rundown:

Read more »
Posted by Chris Moreno at 3:50 PM No comments:

8-page preview is up on the site!

Head over to the Preview page, or look below, to see an 8-page sneak peek at the one-shot!

Posted by Chris Moreno at 3:20 PM No comments: It's been about two months of hard work, long sleepless nights, and I look more and more like Christian Bale in the Machinist, but the debut Zombie Dickheads one-shot is complete!

So you're probably saying, "Oh, good for you! You've finished the book, but what does that have to do with me? When do I get my hands on one of these bad boys?"

Up on Zees' blog is the final to his Zombie Cola pinup for the one-shot! As I've mentioned here before, Zombie Cola was an original concept Zees had way back when that is totally in the vein (pun intended) of Zombie Dickheads. 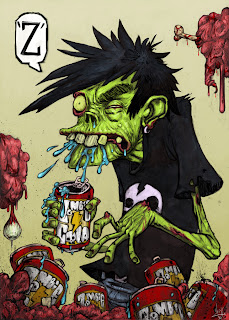 When I was putting the one-shot, and I asked him if he wanted to do a pinup, he was totally inspired to dust off Andy the zombie, and I couldn't be happier. I think there's definite crossover potential. Stay tuned for more on that.

Posted by Chris Moreno at 4:48 AM No comments:

Here's the final art for the cover to the one-shot in all it's full-color gory, I mean "glory". Be on the lookout for this image when I hit the shows in Oct. and through the next year! Hoo boy! It's been a flurry of activity here at the Safe House, Dickheads. Some updates!

Just finished colors on the last of the interior pages for the brand-new 24-page Dickheads adventure, "28 Minutes Later". Now I'm on to the cover! Here's a sneak peek at the inks! I wanted something bold and in-your-face to contrast with the action-less nature of the characters. Kind of passive-aggressive -- just like the Dickheads! Fun Fact: the composition of the piece is based off of the poster for The Lost Boys. Now, Josh is no Jason Patric, but Jason Patric wouldn't look so hot with half of his face ripped off, would he?

Also, the pinups keep rolling in. Here's a WIP on a pinup from my good pal Rob Reilly, the creator of the upcoming comic mini-series, "A.K.A."! Here, Rob envisions Josh feeling a bit nostalgic about when he used to eat food of any kind. I like to call this piece, "In Memory of Meat". 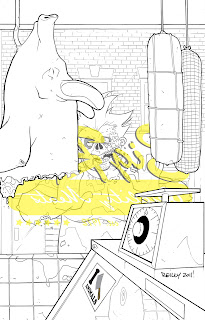 Some pics of the process behind this piece can be found on Rob's blog.

We're fast approaching the first show on the Zombie Dickheads Fall tour, Nashville Comic and Horror Fest! I've been burning the midnight oil, as well at the morning, noon and evening oil getting the book together. After the cover comes lettering and book layout. I've got an IV hooked up for meals so I don't have to leave the old workstation, so I think I'm good!

Posted by Chris Moreno at 7:43 AM No comments:

... and what does he have to do with Zombie Dickheads?
Read more »
Posted by Chris Moreno at 5:46 AM No comments: