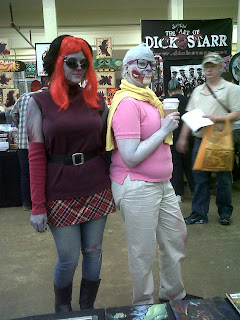 I was shocked! Speechless! And a little thirsty (unrelated.) Was I hallucinating? Had my despondency over not being able to give the people what they want manifested itself in a full-on delusional episode? Nope! It was just Zombie Dickheads super-fans Victoria Clark and Monty Valentine cosplaying as Lisa and Dennis! I was bowled over, I was beside myself, and still a little thirsty. These fine folks took it upon themselves to spread the love of all things Dickheaded by going all out. I have never, EVER, had anyone cosplay as one of my characters. I have had someone cosplay as one of my drawings of someone else's characters ('sup, Heather!), but it's always been a dream of mine that something I created take hold of a fan's imagination so much that they perform the ultimate flattery and dress up like my creations, and here they were -- and the book hadn't even come out yet! BANG! ZOOM! I was over the moon! I could barely contain myself. I started asking all sorts of questions about how they put it all together -- I probably freaked them out a bit, watching this wide-eyed, babbling idiot poking and prodding them for information. They said they knew I was going to be here, and they had thrown it all together the night before from bits and pieces of makeup and costume they already had (a pretty amazing feat, if you ask me.) 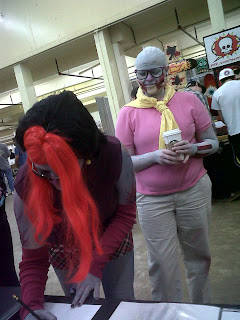 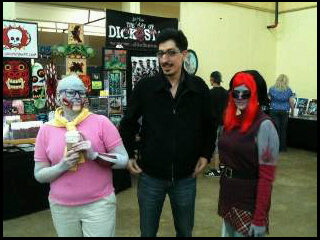 They also came in search of books, of which I had none, but I did have a mailing list at the table for interested parties and took their emails down. They were good sports about it and Monty picked up a collection of Sidekick books instead. We took some pictures together, and then we said our goodbyes. Even after they left, I was still riding high on that wave of goodwill they rode in on. I couldn't stop talking about it all day. 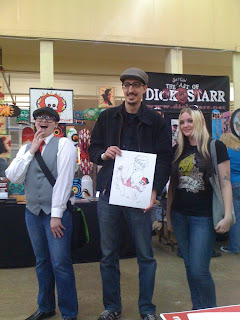 Imagine my surprise when the next day of the show, Monty and Victoria showed up again, this time out of costume. Monty said they were so nervous they forgot to buy some Dickheads prints! So they came by to pick up some more merch. And the biggest surprise was yet to come! Monty handed me a drawing -- the first Zombie Dickheads fanart! 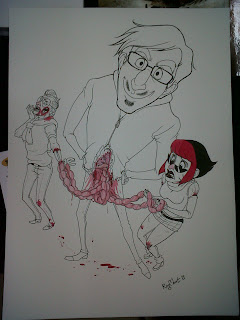 We grabbed a few more pics, chatted some more, and then said some more goodbyes -- this time with hugs.

Overall, what a weekend! The Nashville horror and comics crowd was super cool, and people seemed to really take a liking to Zombie Dickheads. Many thanks to everyone who came by, and also to Marc Ballard and the rest of the Comics and Horror Fest crew for taking excellent care of me. And super-special thanks to Victoria and Monty! Next time I'll have books, I promise!